Despite repeated efforts, for almost two years, to engage the Polish authorities in a constructive dialogue in the context of the Rule of Law Framework, the Commission has today concluded that there is a clear risk of a serious breach of the rule of law in Poland.

The Commission is therefore proposing to the Council to adopt a decision under Article 7(1) of the Treaty on European Union (see Annex II).

The European Commission is taking action to protect the rule of law in Europe. Judicial reforms in Poland mean that the country’s judiciary is now under the political control of the ruling majority. In the absence of judicial independence, serious questions are raised about the effective application of EU law, from the protection of investments to the mutual recognition of decisions in areas as diverse as child custody disputes or the execution of European Arrest Warrants.

The Commission has also today issued a complementary (4th) Rule of Law Recommendation, setting out clearly the steps that the Polish authorities can take to remedy the current situation. Should the Polish authorities implement the recommended actions, the Commission is ready, in close consultation with the European Parliament and the Council, to reconsider its Reasoned Proposal.

Furthermore, the Commission has decided to take the next step in itsinfringement procedure against Poland for breaches of EU law by the Law on the Ordinary Courts Organisation, referring Poland to the Court of Justice of the European Union.

Whilst taking these unprecedented measures, the Commission maintains its offer for a constructive dialogue to remedy the current situation. 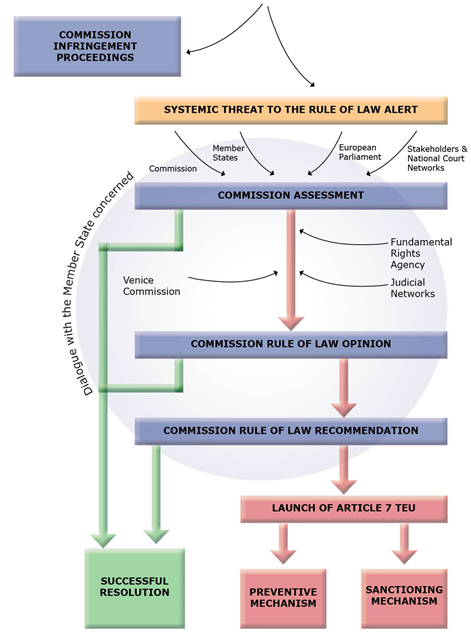